Take a day-trip to Laughlin during the Quartzsite shows to tour historic mines, museums and petroglyphs 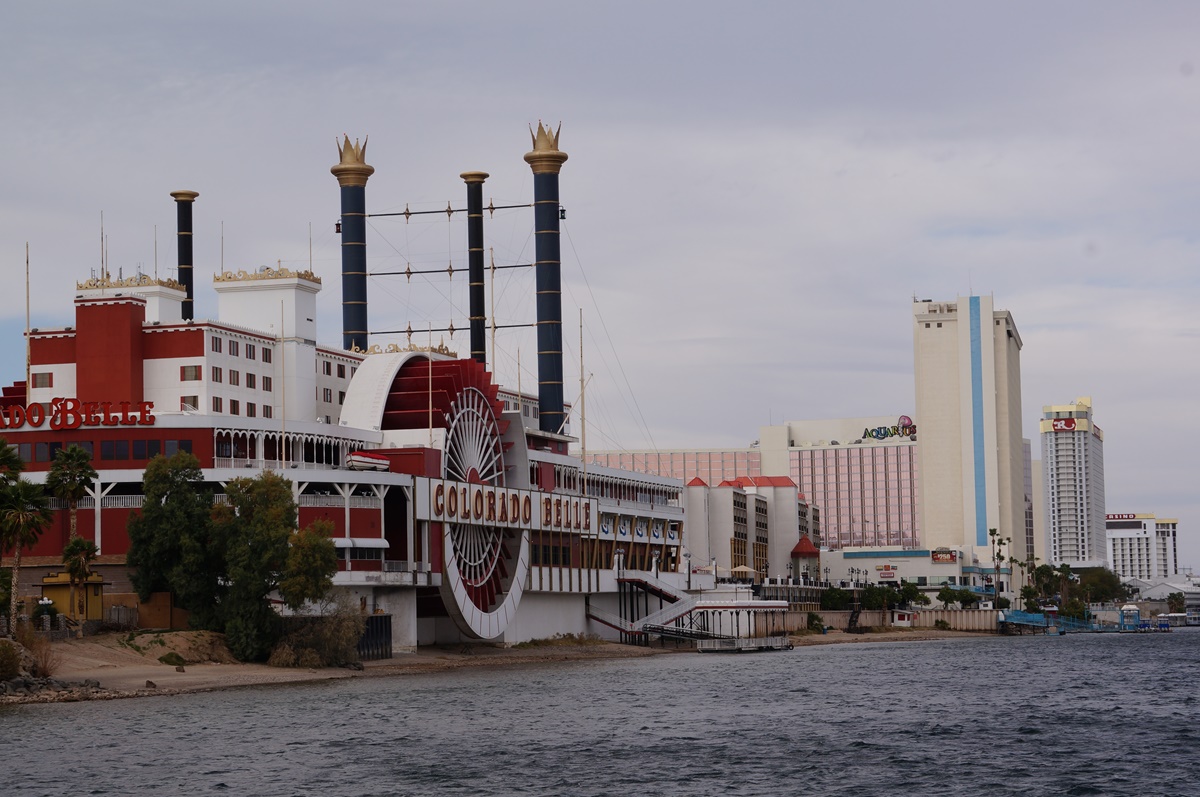 The town of Laughlin is located in the southeastern-most part of Nevada, right across from Bullhead City, Ariz., on the Colorado River. The region is known as the Tri-State Area, as three states – Arizona, Nevada, and California — meet. A scenic two-hour drive from Quartzsite, north through Parker and Lake Havasu City, following the river, brings you to Bullhead City.

Laughlin is famous for its casinos, and the majority of the 4 million visitors flocking there every year to consume a good part of their days and nights gambling. My husband and I spend our time in the vicinity relaxing on the boat tours on the Colorado River, which offer narrated history of the area, visiting old mining sites, museums, mining towns, and petroglyphs (ancient rock engravings). It is fascinating how much history there is in this part of the country, and the hardships that miners had to endure — oppressive heat, rattlesnakes and the scorpions, the harsh drive through the mountains, and the tough conditions of hard-rock mining.

The Colorado River Historical Society Museum is located on the Arizona side, in Bullhead City. It is operated by the Colorado River Historical Society, and you will get a warm welcome from extremely knowledgeable society volunteers. The museum just moved to its new location at the end of 2018, at 1239 Highway 95 at Bullhead Community Park in Bullhead City and is open Monday through Friday 10am to 4pm (Arizona time) and some Saturdays. They are now completing Phase 2 of the construction, with an addition of 1,500 square feet for a reference center and library and hope to be ready by Spring of 2020. There are many displays, artifacts and memorabilia that give a fairly complete picture of the history of the area, the Fort Mohave Indian tribe, the early explorers, mining equipment, some local minerals, and the gold mines.

A short video available to watch at the museum tells the story of Laughlin, and how it was Don Laughlin’s vision that created the booming town, when he first came to this rugged area in 1964 and purchased a boarded-up eight room motel in 1966, which he opened for all-you-can-eat chicken dinners for 98 cents, along with twelve slot machines, two gaming tables, and accommodations for four rooms. Several expansions followed those early days for Don Laughlin’s hotel, the Riverside, and the town of Laughlin. There are now about a dozen hotels and casinos all situated along the river, shopping malls, movie theaters, and live entertainment. Today Laughlin has a population of approximately 10,000, while Bullhead City has another 42,000.

The Colorado River Historical Society Museum is operated entirely by volunteers and kindly asks for a $3 donation from visitors. Please visit their new website at http://coloradoriverhistoricalsociety.org or call (928) 754-3399.

The Laughlin Visitors Information Center has a wide selection of maps and brochures of any site within a one-hour drive and more, and the two ladies that man the center are most hospitable and well-informed about all the attractions and current events. The Laughlin Visitors Center, located at 1555 Casino Drive, is open Monday through Friday, 8:30am to 4:00pm, and closed on Saturday and Sunday. Call (800) 452-8445 or visit online www.visitlaughlin.com.

The Katherine Mine is only a short drive from Laughlin. It was an early 1900s gold mine that lies dead and decaying today. The site belongs to the Lake Mead National Recreation Area of the National Park Service. In 2011 we were lucky to take a tour led by a park ranger departing from Katherine’s Landing Park Ranger Station, tel. (928) 754-3272, filled with information about the history of the famous mine and the ecology of the area. Unfortunately, that tour is no longer available, and due to safety, the site is currently closed.

Gold was discovered in the Katherine-Union Pass area in the mid 1860’s. The major mines were the Pyramid, the Gold Cycle, the Homestake, and the Sheeptrail. The Katherine Mine became one of the largest camps west of Kingman. The mine was closed and re-opened several times. In 1943, during World War II, it followed the fate of many other gold mines, and both the mine that had produced about $2 million in gold and silver and the mill that had made another $3.6 million closed forever.

All that remains today at the ghostly Katherine Mine are extensive concrete ruins — platforms, foundations, piers, stairs, and walkways. There is an assortment of concrete pillars, the foundation of a once impressive structure, lying today like graveyard stones. Iron tanks are scattered around rusting away along with other mining equipment.

The Davis Dam and power plant facility on the Colorado River is 67 miles downstream from the Hoover Dam, just two miles upstream from Laughlin. Built between 1946 and 1953, the dam stretches across the river connecting Arizona and Nevada. We were very surprised to hear that all the water on the mighty Colorado River is regulated exactly between the dams to allow just enough water flow for the irrigation needs of the farmers downstream, and that not one drop of water remains after that to flow into the Gulf of California. Since 911 and the increased security for the dams self-guided tours of the Davis Dam are not available anymore. The best way to see the dam is on the tour boats from Laughlin.

The Davis Camp Park has several petroglyph sites on the grounds. Davis Camp created in 1982, is the former federal housing area for the government workers who built the Davis Dam. The petroglyphs were created by Native American people who called themselves Aha Makav, the “people of and by the river”. The petroglyphs can be viewed very well from an interpretive site.

Grapevine Canyon is located seven miles west of Laughlin off Hwy. 163, south of Spirit Mountain — the spiritual birthplace of tribes of the lower Colorado River. The canyon is a sacred area. Exquisite petroglyphs are etched on large boulders and cliff faces at the entrance of the canyon, evidence of the prehistoric Indians who lived in the Mohave Desert area. It is an easy quarter-mile walking trail from the parking lot.

A winding scenic route brings you to Oatman, a historic gold mining town founded in 1906, located in the Black Mountains, about 18 miles east of Bullhead City. In 1900, a quartz vein containing gold was discovered by Mexican prospector Jose Jerez in nearby Gold Road Gulch. For the next 100 years the Gold Road Mine was worked depending on gold world prices. It has recently reopened for mining and stopped offering their tours.

By 1931, the area’s mines had produced over 1.8 million ounces of gold, but by the mid 1930’s the boom was over, and in 1942 the last remaining mines closed as nonessential to the war effort. A town landmark is the burros that freely roam the streets around tourists and gunfighters. They are a piece of the history, as they came with the early prospectors and were used to haul rock and ore in the mines, or water and supplies. As the mines closed and people moved away, the burros were released into the surrounding hills.

Only five miles from Oatman is the Homestake Mine, a historic gold mine famous today for mining fluorite. The mine is opened for tours on Saturdays and Sundays, 10am to 5pm. Admission is by donation. For more information call (928) 542-3236.

Take advantage of the low hotel rates and inexpensive (but plentiful) buffet restaurants in Laughlin and launch your own tour itinerary to quench your thirst for mining history and Native American art, all with a backdrop of the gorgeous Colorado River and abundant views of stark natural beauty.