https://xpopress.com/showcase/profile/1/tucson-gem-mineral-fossil-showcase
Due to the coronavirus crisis, many shows have been cancelled, postponed, or rescheduled. Show dates listed on this site may have been changed without notifying us. To verify the accuracy of a show date go to the show's website or contact them directly.

It was announced on December 15 that there will be no Tucson gem and mineral shows in January and February. But the shows have been rescheduled to April 2021. Click on the show links below for new dates.

Overview of the Tucson Showcase: Every year for about 2 1/2 weeks in January and February — the rock, gem, mineral and jewelry worlds cosmically align in Tucson. Researchers, gemologists, authors, artists, miners and nearly 4,000 trade companies gather here from every continent to share their treasures, knowledge and expertise with the show’s tens (if not hundreds) of thousands of attendees. Earth’s gem and mineral riches are on display at over 40 venues unfurled all over town, for sale in huge circus tents, expo halls, hotels, warehouses, and in the city’s fine Convention Center. Every type of polished and rough rock and fossil specimen and every kind of faceted jewel that you can imagine is being peddled everywhere — on blankets on sidewalks or in sophisticated exhibits brought in by the world’s finest museums and collectors. All of the shows are free except the Tucson Gem & Mineral Show® held at the Convention Center. Indeed, Tucson hosts the Giant of all Gem Shows, the largest of its kind in the universe. 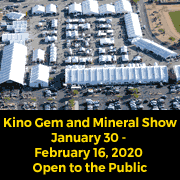