I recently attended the 69th Annual Houston Gem and Mineral Society Show November 11-13, 2022 at the Humble Civic Center as a vendor. I have been either attending or vending at this show for over 15 years. As an on-and-off again former club member I know just how much goes into preparing for, setting up, and executing this show each year. As a vendor, I thought the show was a success this year, as I enjoyed a good profit margin despite the uncertainty of the current economy in the U.S.

The Houston Gem and Mineral Society (HGMS) is a non-profit organization dedicated to the continued study of Earth Science and other related science and art fields. It has a very heavy focus on education, offers many ways to be involved, and the annual show encourages the public’s interest in the hobby. Their outreach to the public through educational activities for adults and children is unmatched.

Most of the educational booths can be found in the hallways surrounding the show. 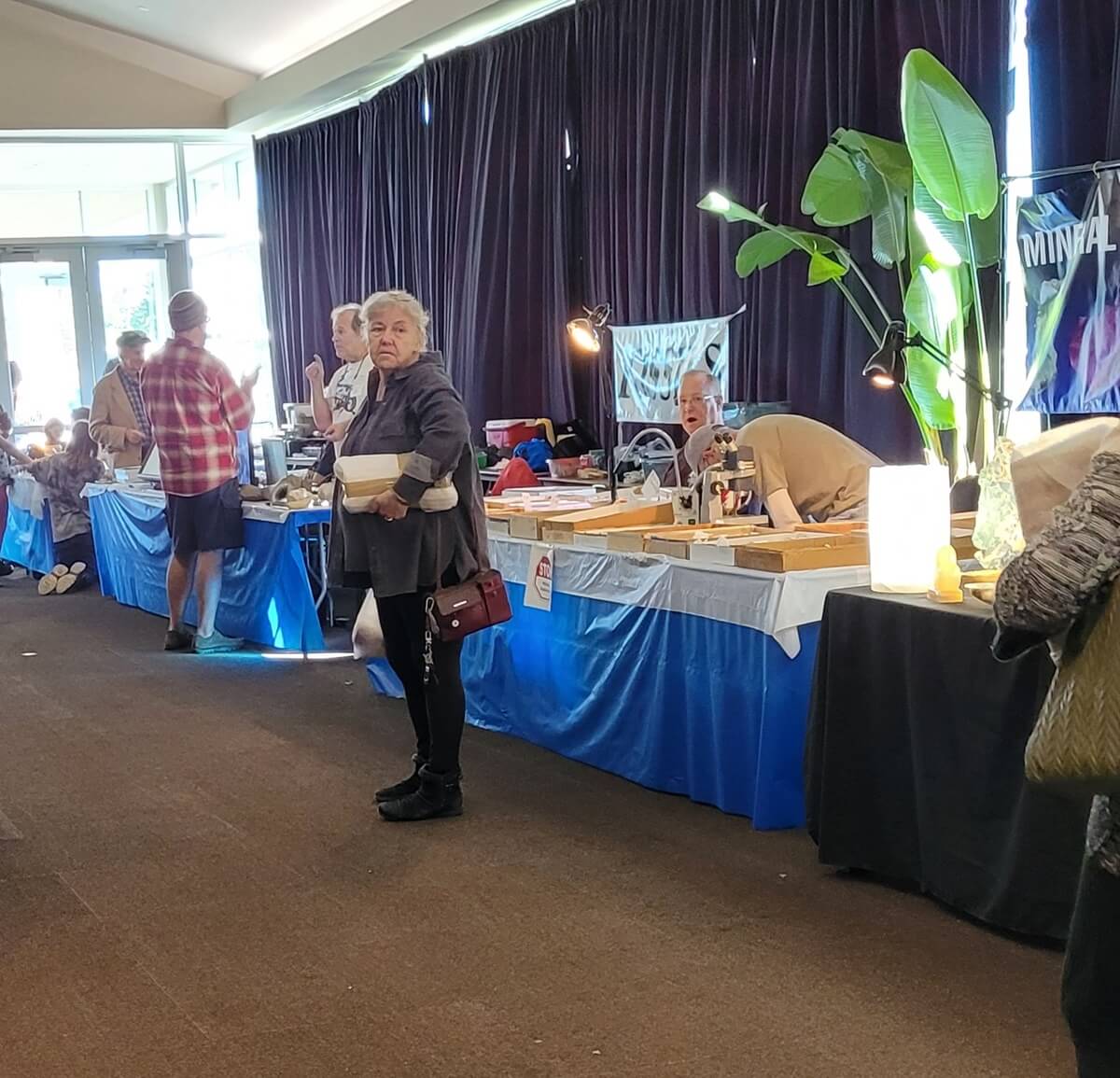 The proceeds from the sales of tickets to the show benefit HGMS and their many programs, like their Earth Science scholarships offered to three college-bound recipients each year. The show offers classes in wire-wrapping, beading, and more each year and demonstrations on lapidary topics can be found throughout the show. The show also features an amazing display of fluorescent minerals, club member displays, activities for kids, a scout program, and a scavenger hunt. On Kids Day the show offers rock sets to private and public schools, a “Dino Dig,” identification of gemstones, minerals, and fossils, and this year saw the return of the “Rock Food Table.” 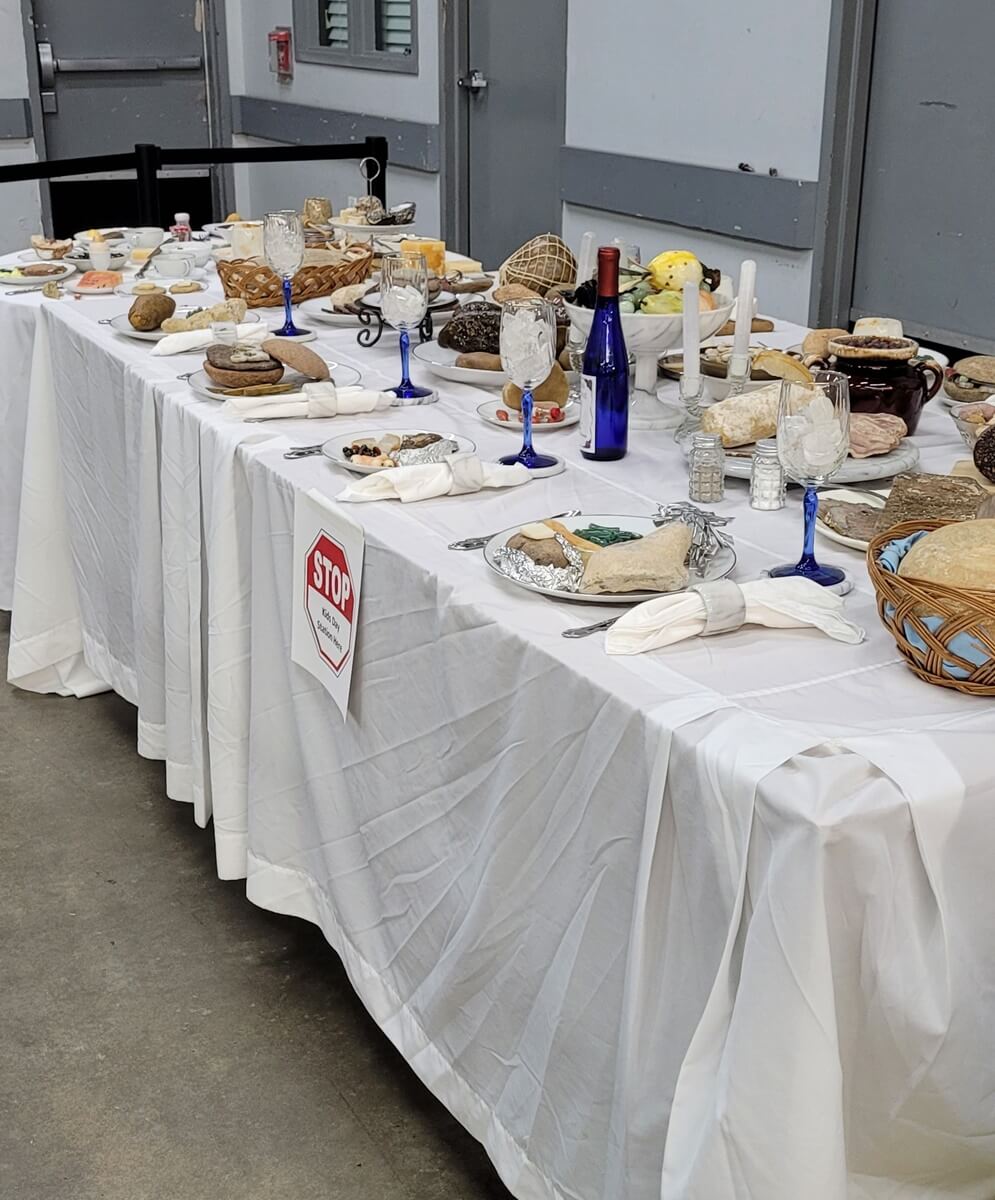 The Rock Food Table began in 1983 and the exhibit was lovingly put together by Bill and Lois Pattillo, who began collecting rocks and fossils — mostly in their natural state (some being cut and polished to fit their purpose) — that were lookalikes for food items. Later the exhibit was purchased in 2014 by Keith and Toni Harmon, and the Rock Food Table is now in the charge of the East Texas Gem & Mineral Society after a generous donation by the Harmons. The amazing display has grown to three tables of “food,” a rocks and fossils feast that has become a must-see at the show. For more information about the Rock Food Table visit https://www.etgms.org/rock_table.

Some of the "desserts" on The Rock Food Table

If you are in the Houston area in early November be sure to visit this fantastic show at the Humble Civic Center. For more information about HGMS and its offerings visit https://hgms.org/.

I caught up with the Dealer Chairman of the 2022 show, Steve Blyskal, for a short interview about his perspective on the show. Steve and his wife, Sigrid Stewart (former club President), have worn many hats at the Houston Gem & Mineral Society over the years, and Steve has served as the Dealer Chairman for many years.

Do you feel like the 69th Annual HGMS Annual Show was successful? Are there certain elements or aspects that you feel lead to a more successful show?

Steve:     Overall, the opinion of the Show Committee, as discussed at the Volunteer Appreciation party, was that the show was successful. Success can be measured in several different ways. We had a lot of customers through the door. We had a lot of kids on Friday, Kids Day. The most home school children we have ever had. In general, the dealers said they had a good or great show.

How many vendors were in attendance for the event? How many attendees?

Steve: There were 45 vendors on six aisles. Our show is quite compact compared to shows where dealers spread out over a large area. Attendees in total (including children) were close to 5,000.

Is there a certain organization or cause that the proceeds from this show benefit?

Steve: The Houston Gem and Mineral Society, a 501 (c3) organization, is the main beneficiary of the show.

Was there anything you felt was the highlight of the event?

Steve: It was good to have the Rock Food Table back at the show.

Do you already have your plans for next year’s show in place? If so, will you share those with me?

Steve: We plan to hold the show again (our 70th annual) on the second weekend of November (Nov. 10-12). We have already reserved those dates with the Humble Civic Center.

Please share a little more about HGMS as an organization that you feel is important for the public to know.

Steve:     HGMS has many specialty groups that instruct people in minerals, fossils, beading, lapidary, and jewelry construction. These groups operate semi-independently under the umbrella of the club, with monthly meetings and their own budgets and projects. The Mineral Study Section, for instance, oversees the fluorescent mineral exhibit at the annual show. They supply the minerals and lights, set it up, and take it down.

The club has an extensive library of books and articles on minerals, fossils, gems, jewelry, collecting areas, and mining. In addition, there are archives of past issues of important magazines like Rocks and Minerals, The Mineralogical Record, Rock & Gem, Lapidary Journal, and other lesser known publications.