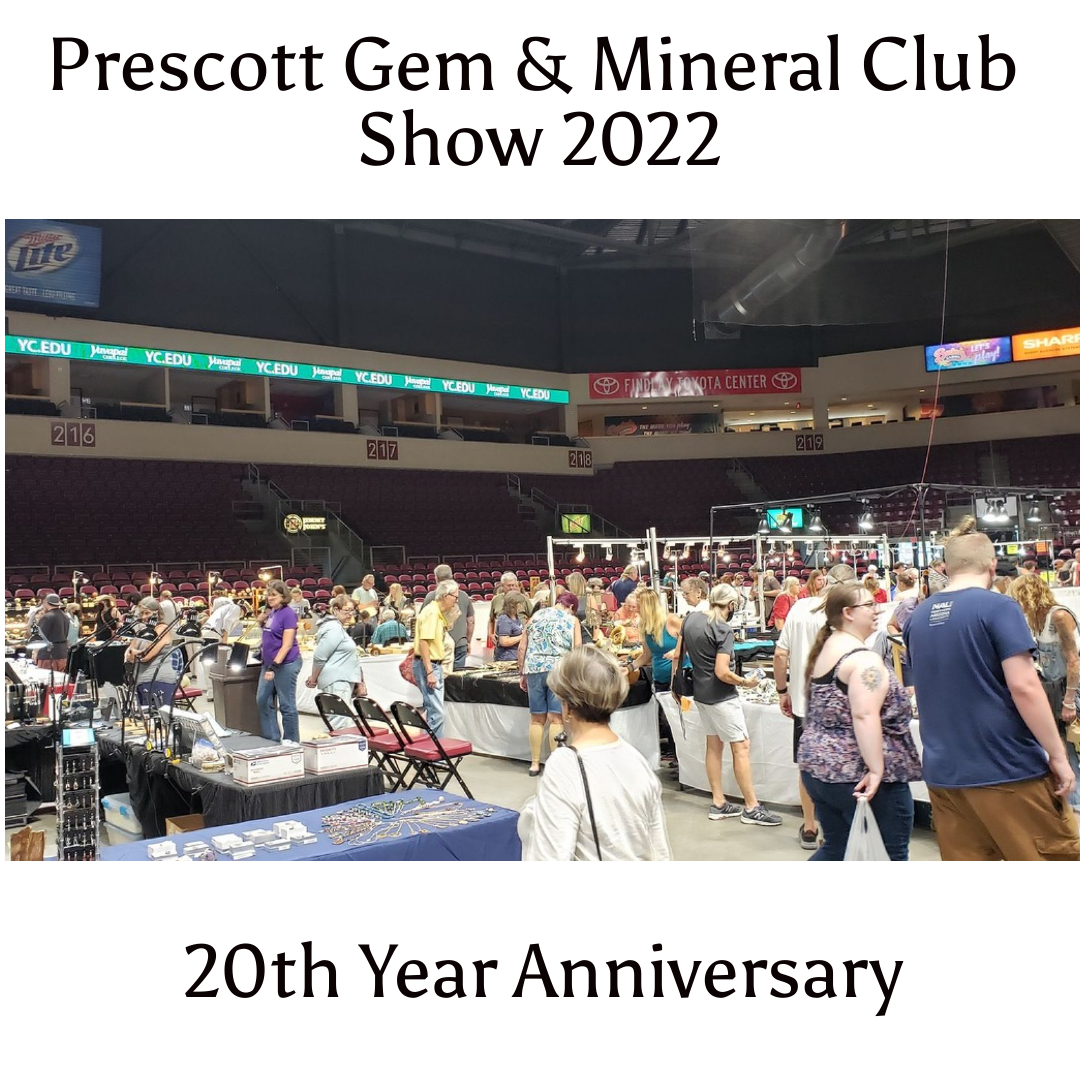 The Prescott Gem and Mineral Club (PGMC) is celebrating this year their 20th Anniversary. Two decades have passed since their first meeting in October 2001 when a few founding members got together. Among them were lapidaries, mineral collectors, and rockhounds. From a few dozen individuals the club has grown to over 300 dedicated members. Their main club event, the 18th Annual PGMC show will be held on August 5-7, 2022.

The PGMC is a non-profit organization, which strives to increase the knowledge and understanding of the sciences pertaining to minerals, gems, rocks, and fossils. Among the club’s wonderful activities are monthly meetings, a very successful gem show, monthly rockhounding fieldtrips weather permitting, junior rockhounds program, monthly newsletter, and a very well-equipped workshop for use by their members. The PGMC also offers every year scholarships to students taking classes in Geology, Lapidary 1 &2, and Jewelry 1&2 at Yavapai College.

PGMC members come from Prescott and the surrounding towns. The area is known as Quad City. The town of Prescott is reached via a short drive northwest of Phoenix. Prescott is the county seat for Yavapai County, established in 1864 near a number of mining camps, and was designated as capital of the Arizona Territory until 1867. The town was named in honor of historian William H. Prescott. Today, historic buildings, saloons, galleries and museums along the famous Whiskey Row, draw thousands of visitors every year.

Current President is Maggi Lieber, a longtime club member and wonderful lapidary with a particular love for intarsia, surrounded by a very active board.

The PGMC holds their monthly meeting on the first Saturday of the month, at 9:30am, at the Moose Lodge 319, at 6501 East 6th Street in Prescott Valley. Besides a show-and-tell, invited speakers give lecture presentations on a variety of subjects related to lapidary, mineral collecting, jewelry and fossils.

A main event for PGMC is their annual show. Their 17th Annual show was held in 2021 with great success. The annual PGMC show is today regarded as one of the best and largest indoor local shows in Arizona. It hosts over 60 vendors from the Southwest selling slabs, cabochons, jewelry, beads, lapidary equipment and tools. The show is held in recent years at the Findlay Toyota Event Center in Prescott Valley, located seven miles east of Prescott. 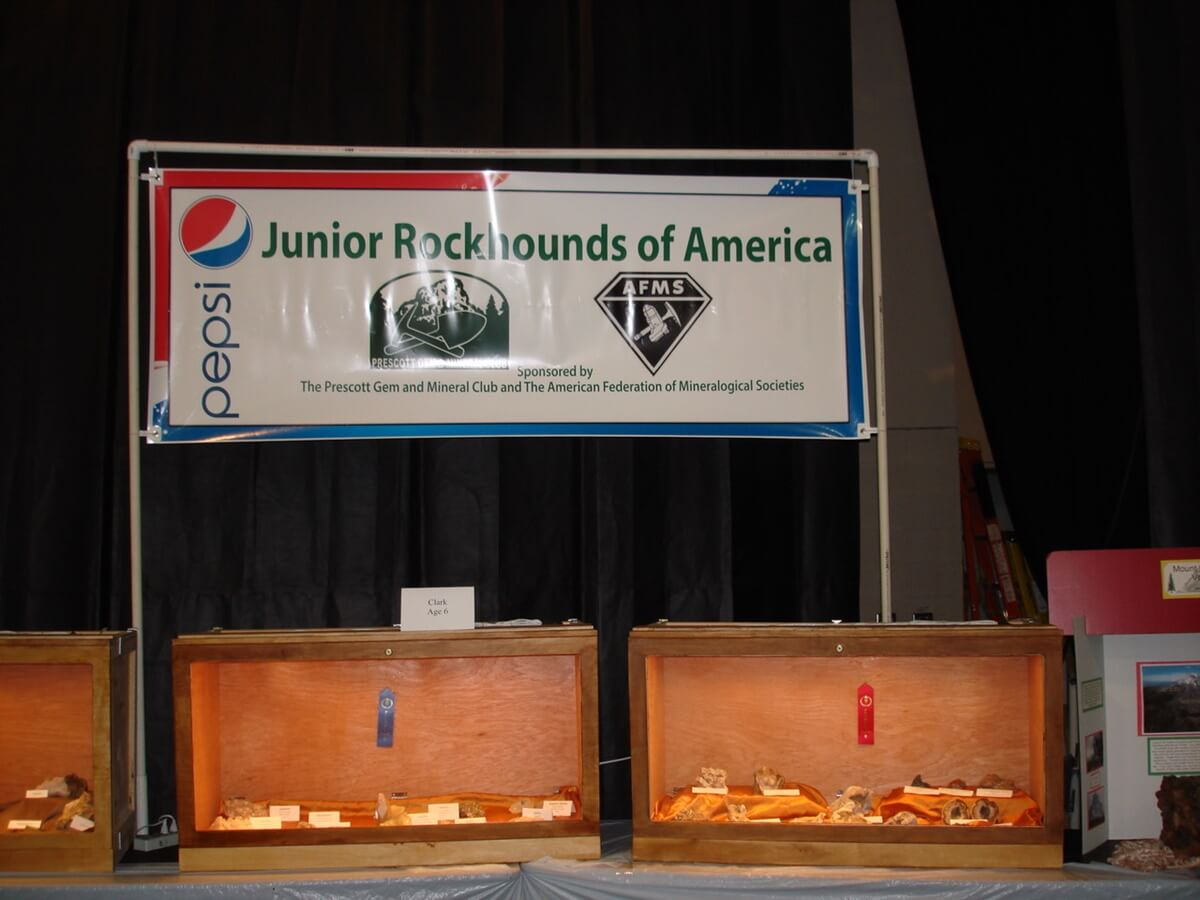 One of the most beloved attractions at the PGMC show is the fluorescent mineral display, set up in a black tent. During the past six years the display is organized by club member Nick Saccketti, and it includes many minerals from his private collection. He was director of programs for PGMC for several years, and is a member of the research group of the Fluorescent Mineral Society.

Fluorescent mineral displays are popular because people are amazed at the vivid, bright colors from fluorescents. When fluorescent minerals are illuminated by ultraviolet light, they seem to glow as if lit from within, which in a sense they are.

Nick introduced the use of near-UV lasers operating at a wavelength of 405 nanometers, in addition to the typical shortwave and longwave UV lamps used in typical fluorescent displays. These near-UV lasers are commonly known as violet laser pointers, but the lasers they use in their PGMC display are more powerful diode lasers typically used in DVD players and laser engravers. Many longwave-fluorescing minerals will fluoresce at 405nm, even though it is actually at the violet edge of the visible spectrum.  The fluorescent colors produced are different from those produced by longwave-UV “blacklight”, a feature they highlight in their display.

Visitors experience the sequence of laser-activated colors on longwave-fluorescing minerals first with only the lasers. Then, the cabinet is flooded with UV from high-power shortwave and longwave lamps, which illuminates the shortwave-activated minerals, and the longwave-activated minerals. Next the two laser beams are brought back to highlight certain minerals, showing the fluorescence color changes from the longwave UV (365nm) to the 405nm laser. 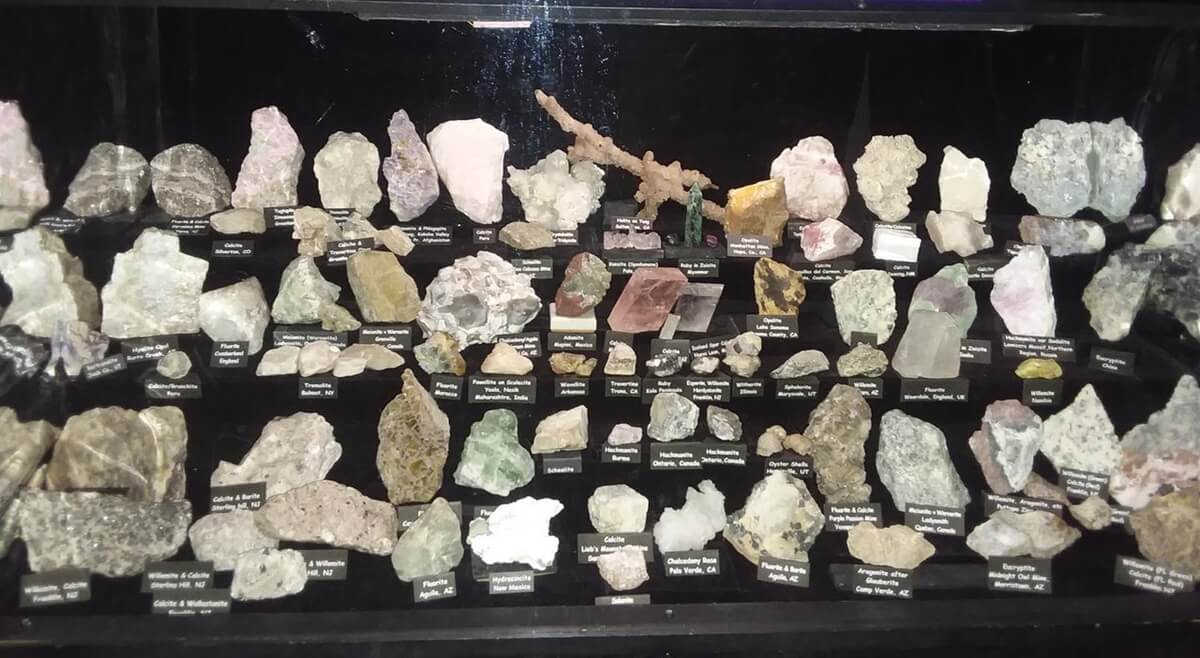 The PGMC fluorescent display teaches the science behind activator elements, fluorescence, phosphorescence, and why fluorescent colors are so vibrant.  The lasers and the kinetic feature enable a unique opportunity to explain these in a show lasting a little under five minutes.

Helen Serras-Herman, a 2003 National Lapidary Hall of Fame inductee, is an acclaimed gem sculptor with over 39 years of experience in unique gem sculpture and jewelry art. See her work at www.gemartcenter.com and her business Facebook page at Gem Art Center/Helen Serras-Herman

Melanie Capps has been PGMC show chairman for several years.

The PGMC geode-cutting station is a popular place at the show, especially for kids watching.

The PGMC fluorescent mineral display is illuminated by a daylight LED strip.

The PGMC display is illuminated by 95W longwave and shortwave lamps. The 405 nm lasers illuminate the willemite and common opal, second from right from the smaller calcite rhomb.